Disclosure: Strimoo is reader-supported. We may collect a share of sales or other compensation from the links on this page.

It's 2020, the whole of Auto-Germany is affected by the Corona standstill. Time to take a look at the Czech Republic. The production lines at Skoda are currently at a standstill there, but behind the scenes, new models and model updates are being worked on diligently. Unfortunately, due to the cancellation of the Geneva Motor Show in March, we are missing pictures of new studies - nevertheless, we want to collect the information and rumors about new models in the model year 2021.

For Skoda, the year got off to a good start with the introduction of the new Skoda Octavia and the Citigoe IV (a driving report from the practically identical VW e-up!). The new Skoda Octavia comes even closer to its corporate brother Golf 8 in terms of equipment. From now on there are matrix LED headlights, a head-up display, and improved assistance systems, e.g. a 360 ° camera (from autumn). In addition, Skoda is increasingly relying on the electrical support of the drives and offers various mild and plug-in hybrid drives. Even the “RS iV” version of the Skoda Octavia relies on a hybrid drive with a system output of 245 hp. 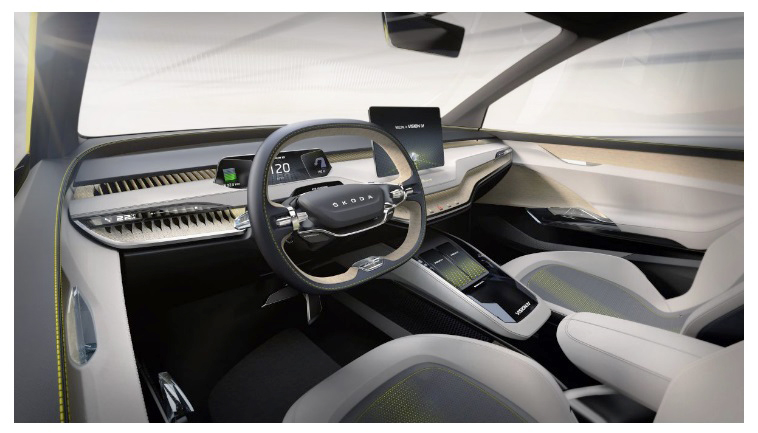 Skoda 2020: the first electric SUV is in the starting blocks

After Skoda already has an electric car for the city with the Citigoe IV, the second fully electric surcharge will probably follow at the end of the year: With the "Enyaq", Skoda is launching a fully electric SUV on the order of the Kodiaq (4.69 m) on the market. The study “Vision iV” (photo at the top) gives an outlook. However, it can be doubted whether the extremely dynamic shape including the coupé rear is actually going into series production.

On the drive side, the engines from VW ID.3 can be expected (150 HP, 204 HP). The study carries two engines, which together produce 306 HP - this could correspond to a possible Enyaq RS. The range of the study indicates Skoda with about 500 kilometers, which we think is quite realistic (battery capacity of the study: 83 kWh). The most striking thing about the interior is the free-standing display, which - as indicated by the first photos of Erlkönigen - probably goes into series production. However, the interior will not be as reduced as in the study.

Last year, Skoda retired the Rapid and replaced it with the Scala (Skoda Scala test report) - now the Fabia follows with a new generation. We expect a show in Paris in autumn 2020 or in Geneva in spring 2021. The current Fabia has been on the market since 2014 and is not yet based on the technical MQB-A0 base from Volkswagen but on the much older the PQ26 year 2009. Accordingly, the interior of the new Fabia is likely to be very much based on the Scala. The exterior of the Fabia will probably be a little more dynamic than the current model.

It is questionable whether Skoda will deliver the Fabia again with diesel engines. The reason for this is the increasingly strict pollutant limits, which make the cleaning systems of diesel engines more and more complex, expensive, and therefore unprofitable in the small car class. Instead, Skoda could rely on mild hybrids with 48V electrical systems, as in the Octavia. It is also unclear whether the new Fabia is available again as a "Combi" or whether this role is left to the Scala and the Kamiq compact SUV.

In addition to the launch of the new Enyaq and Fabia models, we expect some facelift and engines. The “Vision RS” study is certainly worth mentioning, as it gives an outlook on a sporty version of the Scala with 245 hp. The drive train is identical to that of the Octavia RS iV. A presentation would be conceivable in autumn at the Paris Motor Show. An RS version of the Superb, which received a facelift last year, is also conceivable. Here Skoda could use the new 240 HP diesel from the VW Passat and / or the current top engine, the 272 HP petrol engine.

In terms of model maintenance, a facelift for the Kodiaq and the Karoq is expected no later than 2021. The focus here will probably be on improving the assistance systems and hybridizing the engine range.

Get coupons from your favorite retailers sent to your inbox at the beginning of every week.
You can cancel anytime.